English Folklore: 10 of the Most Famous Figures from English Mythology

England isn’t usually associated with detailed and rich folklore or mythology. Instead, we tend to think of the rich Greek, Roman and Nordic stories which feature a lot in everyday media; yet, English Mythology is full of many colourful characters if you read into it.

At St James Hotel, we are lucky enough to sit at the heart of many of England’s most popular folk heroes and stories, in particular, Robin Hood. Nestled in the centre of Nottingham, figures of Robin of Loxley feature throughout the city and our immediate surroundings, which inspired us to explore what other major English folklore figures there are out there.

Here is a list featuring 10 of the biggest names, including some that you may not have heard of. 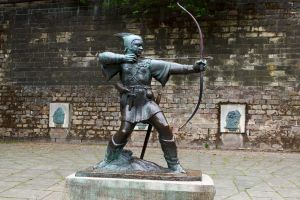 It would feel wrong to start anywhere other than our own local hero, Robin Hood. The story of Robin Hood tends to be linked to Nottingham and specifically, the Sheriff of Nottingham in modern literature and stories, but that wasn’t always the case. Robin Hood’s origins are quite difficult to pinpoint as multiple different regions of the country had their own stories and adaptations, including one where Robin Hood was the name given to a whole group of bandits.

Traditionally though, Robin Hood was a single figure – a highly skilled archer who fought the corrupt Sheriff of Nottingham to protect the people. Included in his escapades were his band of Merry Men and love, Maid Marian. Primarily, Robin Hood’s activities would focus on stealing from the rich (the Sherrif) to give to the poor, as well as disrupting any nefarious schemes that the Sheriff was enacting upon the people. It’s an infamous story and one we’re very proud of – you can even visit the legendary Sherwood Forest and engage in stories, legends and archery classes all centred around the Hood and his supposed escapades.

If interested in exploring this aspect of English folklore, be sure to get in touch with the team here at St James Hotel. Our boutique rooms and facilities are in the perfect location, with great travel connections to Sherwood Forest and the rest of Nottinghamshire. St James offers a great base of operations to get a taste of the legacy Robin Hood’s story has left on the city.

Guy of Warwick was another heroic folklore figure who featured in romance stories throughout the 13th to 17th centuries. Generally considered a legend rather than a real historical figure, the story surrounding Guy of Warwick tells of a humble page at the Earl of Warwick’s court. After falling in love with the Earl’s daughter, Felice, Guy is forced to prove he is worthy of her hand in marriage by completing a set of tasks and becoming a knight.

Much in the style of Jason of the Argonauts or Hercules from Greek Mythology, these tasks involved all manner of challenges. From slaying monsters like the Dun Cow and a Giant Boar to travelling to Europe, Guy eventually earns Felice’s hand in marriage. This is only half of the story though which goes through another tragic arc, emphasising how it’s likely more myth than history. A great story nonetheless.

The Lincoln Imp began life as a simple feature inside Lincoln Cathedral. Since then, the figure has become a symbol of the city, likely a surprise for the initial carver who created the piece. The legend surrounding the Lincoln Imp focuses on Satan sending two imps to Earth to cause mischief. Upon reaching the city of Lincoln and Lincoln Cathedral, the imps began damaging the building before being stopped by an angel who turned on of them to stone, leaving the adornment we see today. The other imp is said to have gone to Grimsby, where it too was eventually turned to stone in St James’ Church.

Hailing back to the 16th Century, or potentially even before that, Jack o’ Kent was a cunning figure in English mythology who supposedly had a talent for outwitting the devil. Hailing from Herefordshire, most stories surrounding Jack o’ Kent involved him making deals with the devil only for him to use his guile to still come out on top.

One of the most popular stories involves Jack taking a deal with the Devil to secure a good harvest in exchange for half of his crops. Upon asking the Devil where he wanted the ‘tops’ or ‘bottoms’ of the crops, the Devil chose the tops, expecting to get most of the wheat from the crop. In actuality, Jack planted turnips, meaning that the Devil received the least valuable part of the plant. A distinctive and interesting character.

Spring-Heeled Jack is a slightly more modern English folklore figure, coming to light during the late 1800s. In actuality, Spring-Heeled Jack almost caused panic in Victorian London and was rumoured to be a rooftop-leaping devil or demon, with some recounts claiming that he could even breath fire. The ‘sightings’ varied in detail from claiming that the figure was gentlemanly and could speak English to claims that he was a ghost or had eyes that were red fireballs. Regardless, there was no consistency in the sightings and the craziness of the reports made mainstream media doubt the existence of the figure; yet, the public continued to develop a legend surrounding the creepy individual and the attacks that were associated with him. You can still see Spring-Heeled Jack inspired characters throughout modern media.

The story of the Cauld Lad of Hylton, a ghost from Sunderland, does have a small amount of history attached to it. The story tells of a stable boy who, upon being late to complete the task set by Baron Hylton, was killed by the Baron either on purpose or by accident. Supposedly, the body was thrown down a well but eventually discovered and the Baron was charged, only for an alibi to appear at the last minute claiming that the boy died in an accident. This is the part of the story which could have some element of truth as records show that Robert Hylton, the 13th Baron of Hylton, was pardoned from a crime in 1609.

Beyond this, there are more traditionally fantastical happenings. Supposedly, the castle began to be haunted by the boy, with the kitchen being left messy overnight or moving of ashes from the fire to the floor. One of the castle cooks took it upon herself to stay up to see who was doing these things and saw the ghost of a boy who was crying about being cold – afterwards, she left a warm cloak every night and the haunting stopped. This developed into the title of the “Cauld Lad of Hylton” that we know today.

King Arthur is easily one of the most infamous and legendary mythological figures who still features in modern media. Stories of King Arthur gained such traction that at a point, many believed that he was a real figure. Despite this, he was not real and most of the locations and events in the legend are completely fabricated.

King Arthur’s story is one of the most complex English folklore tales with multiple stages covering how he pulled the sword from the stone and became king, as well as his escapades with the Knights of the Round Table and the Holy Grail. Regardless, King Arthur’s legacy is one we still feel today and he has played a major role in creating the English identity that currently exists.

Linked to the story of King Arthur is the legend of Jack the Giant Killer. The story tells of a young man who encounters a giant and successfully kills it using wit and guile. Afterwards, the townsfolk give him the title of “Giant-Killer” and he swears to kill all the giants living in Cornwall – which he does. This legendary figure is often linked to another Jack from the story of Jack and the Beanstalk, as they both are cunning young men who steal from and defeat giants, though the tales are separate, they simply have a similar theme.

Jack the Giant Killer, as well as Jack and the Beanstalk, are two stories which have been used throughout history in theatre and film making the two Jacks some of the best-known English folklore figures.

9.    Herne the Hunter and the Wild hunt

Herne the Hunter is a slightly lesser-known figure in English mythology, though he is associated with a much more widely recognised folk tale in The Wild Hunt. The Wild Hunt is a story which features across multiple European countries and tends to centre upon a mythological creature or demon leading a ‘hunt’ with an army of ghostly apparitions following behind. Most commonly, The Wild Hunt is associated with Nordic Mythology and is led by Odin but it has also featured in English folklore tales under a variety of names.

Herne the Hunter is a ghostly figure who, in Grimm’s version of the tale, once led the Wild Hunt. He was supposedly from Windsor Forest or the county of Berkshire and was usually depicted as having antlers growing from his head riding a horse. Herne the Hunter even featured in the Shakespearean play The Merry Wives of Windsor dating back to 1597.

Finally, we have one of the most popular and well-known figures in English folklore, the Green Man. The Green Man is almost more of a symbol than an individual figure and his face features across the UK, sometimes emerging from a set of vines or leaves. Sometimes, his features are made of these things from nature. Generally, the Green Man is considered a sign of fertility and rebirth, featuring in sculptures and stonework regularly and even in new creations to this day.

There is a good chance that you will be able to find an example of the Green Man in an old stonework building nearby, regardless of where you are in the UK.

Folklore and legends of the past are always interesting to hear, no matter your age or background. This is part of why so many enjoy learning more and exploring the history behind these individuals further. At St James, we are lucky enough to live at the centre of Nottingham, the home of one of English folklore’s most recognisable individuals. Not only that, but Nottingham also has excellent travel connections to the rest of the country, making it a brilliant home base to work from if you’re thinking of taking trips out to get a taste of more English history.

If you’re interested in visiting, explore our available accommodation today or get in touch with our dedicated team.